I’ve lost count on the number of weeks I’ve been working on decluttering my entire home.  Here’s the checklist!

Those dates to the right of the projects are (or were) the deadlines. So you can see I’ve missed a couple of them.  I did do my portion of the master bedroom, but I didn’t check it off yet because I’m hoping Bobby will go through his things, as well as his clothing.  I spent quite a bit of time rearranging and redecorating the master bedroom.  Maybe I’ll do a room tour soon.

The schoolroom was almost finished. I only had some things to go through in the closet, BUT… I got sidetracked by homeschool planning for next year. I started making all sorts of lists and piles. I’ve been listening to Brave Writer podcasts and lectures on Classical U.  (The latter seriously made helping Bobby weed and spread mulch for six hours enjoyable.)  I’ve been pondering educational philosophies and pedagogies, which is totally normal for this time of year, but not every year. Some years, (usually when I’m overwhelmed), I just follow prepared lesson plans.  But not this year. I guess I’m feeling pretty good.  And I’m having fun with it, even if it is rather geeky.

The basement.  A major project.  One day, it rained like crazy, and I worked on it all day. And after that it was sunny for weeks and I kept taking the kids swimming at my father’s pool. But I made a good dent in the basement.  I started with the largest items first. I used a local Buy Nothing Facebook page to “gift” a plastic see-saw, a sandbox, a TV stand, a framed giclée print, and loads of VHS movies.

I found out that you should let things “simmer” on that group.  You don’t just give something to the first person who can get to your home.  You give it time for many people to say they’re interested in the item and then you choose one.  It’s not as efficient as dumping a load off at the Salvation Army, but it does feel good to make people happy, and if they really are trying not to buy anything, I’d like to help them. It’s an interesting goal that sounds difficult to achieve.

I also got rid of a twin bed and Bunkie board through a Craigslist free stuff post.  And I collected many bags of trash which Matthew took away along with this stuff in the trailer.  It was progress.  Then I went around the basement taking notes of all of the areas/categories that I plan to address one at a time.

This past week, it rained everyday.  But instead of working on the basement, I jumped ahead to sentimental items.  Joseph and Sarah (especially Joseph) were pushing me to figure out how to convert the family home movies, which are on VHS-C tapes to DVD’s.  So I took out all this stuff. 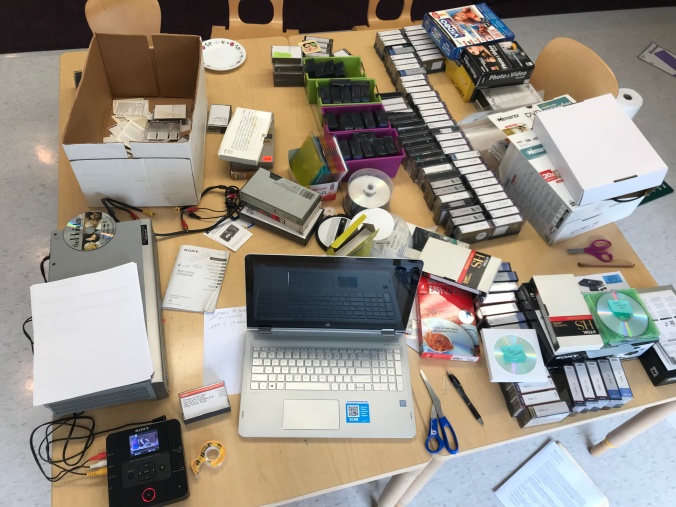 Some of it was from my Mom, some was from Bobby’s study, and I needed a VCR. Matthew had three in the basement. (Sometimes it’s handy having a collector in the house.)  I later found out that Bobby had another VCR in his study.  He was probably saving it for this project.

THIS IS A MAJOR PROJECT!!  It should have it’s own category on the checklist. In fact,  I think each of the major projects should have their own checklist. So my goals for this weekend will be to finish decluttering the schoolroom, and to make new checklists for the basement, sentimental items, and paper. The garage and digital clutter can wait.  If I really focus, (and don’t watch so many movies) maybe I can complete these projects by the end of this summer.